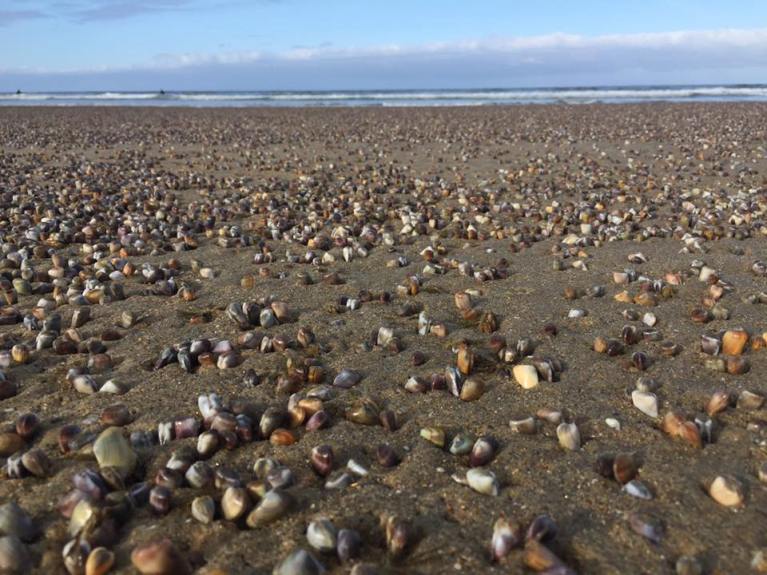 MBC found a record-breaking 27,366 small, colorful Gould’s bean clams (scientific name Donax gouldii) off the shore of El Segundo, California as part of a marine monitoring program in July 2018. Taken at a depth of 20 feet, the sample was filled with clams only  of an inch long, indicating that they had recently developed from free-swimming larvae that settled at that location. These individuals comprised 99% of the organisms in the sample.

However, bean clams were scarce or absent at all the other nearby sampling locations. This patchy distribution has been observed in other years, with about 10,600 bean clams at the same location in 2000 and 270 in 2010. Other areas sampled by MBC have also seen episodic settlement of bean clams, with 11,027 individuals found in 1998 and 6,236 individuals in August 2016 at Mandalay Beach near Oxnard in Ventura County.

Bean clams are known to occur sporadically along the West Coast from central California to Baja California, Mexico, settling on exposed beaches and shallow subtidal zones during warm years. They typically live only one year but can live up to three years and reach one inch in length. A study conducted by Dr. Wesley Coe in La Jolla from 1926 to 1955 showed that recruitments to his intertidal study area occurred episodically, with large numbers of individuals in only four years during that interval. Coe’s study included an evaluation of bean clam growth rates, with an average length of ½ inch at one year of age, the approximate age when they reproduce.

Categories:
Marine Services
Thank you! You're subscribed
Oops! Something went wrong while submitting the form