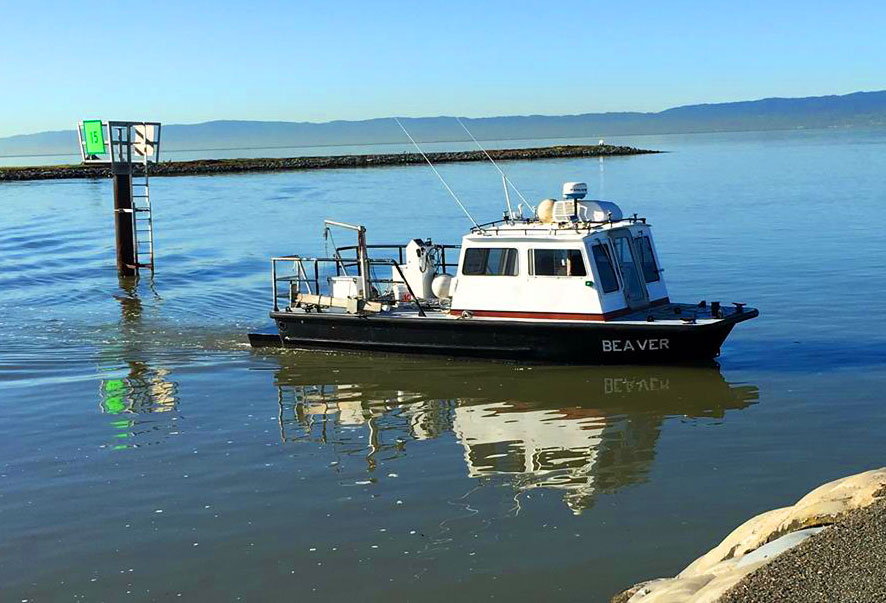 With 462 berths and a public boat launch ramp, San Leandro Marina, located just south of the Oakland International Airport in San Francisco Bay, has provided generations of Bay Area boaters with access to the bay via a 2-mile long entrance channel through the mudflats.

Due to the high cost of the Marina dredging and the lack of Federal funds for entrance channel dredging, the City of San Leandro has decided to “de-commission” the Marina, remove the docks, and allow the Marina basin to fill-in with sediments through natural deposition.

MBC is honored to have recently received a contract from the City of San Leandro to conduct the final hydrographic survey of the Marina and entrance channel.

The purpose of the final hydrographic survey is to provide a color bathymetric contour chart (shown at right) to help guide the remaining recreational boaters in the Marina across the shallow entrance shoal and out the channel into San Francisco Bay.

MBC’s hydrographic surveyor, Steve Sullivan, helped conduct the final survey of San Leandro Marina.  Sullivan, who for the past 35-years has conducted pre- and post-dredge surveys in the Marina for the City at 8-year intervals, as well as in the entrance channel for the U.S. Army Corps of Engineers at 4-year intervals, is saddened by the decommissioning of San Leandro Marina:

“Almost all research surveys in South San Francisco Bay have historically been launched from San Leandro Marina,” Sullivan said. “The decommissioning of San Leandro Marina is a severe loss to Bay Area boaters and researchers alike”.

MBC President Shane Beck is more pragmatic about the Marina decommissioning. According to Mr. Beck,

With dredging suspended, Beck predicts that over time, the Marina and entrance channel will likely become a mud flat, and eventually acquire salt marsh emergent vegetation.

Thank you for the memories, San Leandro.

Categories:
Surveying Services
Thank you! You're subscribed
Oops! Something went wrong while submitting the form